I just finished reading a book called In the Presence of My Enemies, written by Gracia Burnham about she and her husband Martin’s year of captivity in 2001 in the jungles of the Philippines.  They had been missionaries there for fifteen years, and Martin was a pilot to several of the islands, flying goods and supplies out to missionaries working with tribes in remote areas.

Martin and Gracia decided to celebrate their eighteenth wedding anniversary by staying at a resort for one night, but they ended up being in the wrong place at the wrong time.  That night, members of an extremist Muslim group called the Abu Sayyaf broke into the resort, and took several people hostage, including Martin and Gracia.

They spent the next year in the jungle, being forced to move from place to place as the Filipino army tried to attack the Abu Sayyaf and release the hostages.  They were exhausted, starving, and sometimes their faith faltered.

I picked up the book at my friend Edith’s house, here in Uganda.  We were over for lunch, and I was checking out her books.  After reading the back, I realized that I had briefly heard their story several years ago, and started reading the beginning of the book.  As I read about how they met in college in Kansas City, decided to pursue missions, and trained and moved to the Philippines, I was hooked.  I asked if I could borrow the book, and over the next week and a half, read the entire thing.

I got really excited when she wrote about how she and Martin, on their way down to Arkansas to see Gracia’s family, stopped in Springfield and ate at the Battlefield McDonalds.  Later in the book, she tells one of the other hostages about Silver Dollar City.  Whenever something about the Springfield area would come up, I would excitedly tell my teammates about it.  It was so cool to get a little taste of home, even all the way in Uganda.

I happened to read the end of the book when Angela, Rachel, Cheyanne and I had left the boys, including Josh, at home to join another team who is close by for a girls’ night.  We did the classic (but not too stereotypical) girls’ night activities-a delicious dinner, fresh baked cookies, played a game, and watched a movie.  I was getting tired, so I left the movie early to go to bed.

As I laid on my sleeping pad, trying not to wake the other girls with the light of my headlamp, I read about (SPOILER ALERT) the Filipino army’s botched attempt at rescuing them, and Martin’s death.  Although I already knew the outcome, it was still hard to read, especially on a night that I was spending away from Josh.

I realize that spending a night away from your husband is nothing to actually losing him, but in that moment, as I read Gracia’s account of losing her best friend to senseless violence, it hit me in a way that I didn’t expect.  I cried as I read about how she was loaded in the helicopter, and had to leave Martin’s body in the jungle because of the severity of the wounds she sustained.

The next morning, I could not wait to get back to Josh.  As I read about one woman’s loss of her husband, I remembered how thankful I am for mine.

Many people ask me, “What is the hardest part about being married on the World Race?”  My honest answer is being around your spouse 24/7.  That’s just not what we were used to in the States, so sometimes it is hard.  Sometimes we need time apart to make our time together better.

Even though it is challenging, I hadn’t realized how dependent I had become on being around each other so much.  When the men and women separated for the month in Thailand, leaving Josh at the airport was one of the hardest things I’ve done.  We spent the month in opposite sides of the country, more than 25 hours of travel apart.

All month, I felt like a piece of myself was missing.  I know that’s so cliche, but it really was true.  I just didn’t feel like myself.  It’s interesting that just myself no longer feels like myself.  It’s that whole two become one flesh thing, like Jesus said.

I highly recommend reading In the Presence of My Enemies.  It’s a story about faith through trials, and how the love of two people for each other, as well as the love of the Lord, kept them going through difficult times.  It’s also a wonderful tribute to Martin, and it is inspiring to read about how they both live(d) their lives.

Gracia now lives in the States, and travels for speaking arrangements, and has also written another book To Fly Again.  She has made telling their story her ministry, and encourages countless people around the world through it.

Of course I love this, since I believe in the power of story.  Jesus can take something as horrible as a year in captivity, and the loss of a spouse, and turn it into something beautiful.  In my case, it was remembering how much I cherish and admire Josh, and how I am so thankful to be living this life alongside him. 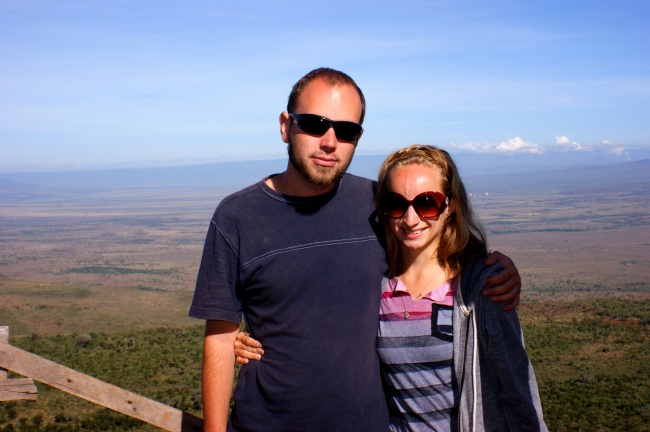 (Josh and I at the Great Rift Valley in Kenya)